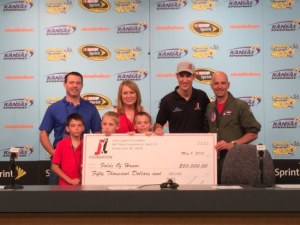 KANSAS CITY, Kan. (May 8, 2015) – During a presentation ceremony at Kansas Speedway, NASCAR Sprint Cup Series driver Joey Logano announced a generous donation to Folds of Honor. The No. 22 Penske Racing driver founded the Joey Logano Foundation, which has pledged to donate $50,000 to Folds of Honor, a nonprofit organization that provides educational scholarships to families of military men and women who have been killed or disabled while serving in the armed forces.

“On behalf of Folds of Honor, I would like to express my deepest gratitude to Joey for the generous donation from the Joey Logano Foundation,” said Folds of Honor Founder Major Dan Rooney. “Families are left with both emotional and financial burdens when there is a fallen or injured soldier, and it’s our goal to assist them during the most difficult time. With this donation, we will be able to make a difference in the lives of military families nationwide.”

Logano, who won the Daytona 500 in February, made a promise to donate his winnings to the organization had he won the Folds of Honor QuikTrip 500 on March 1 in Atlanta. He finished fourth in the race, but still wanted to contribute to the organization as it aligned closely with his foundation’s mission, which is focused on giving those in need a second chance.

The announcement comes just one day before Kansas City, Kan., plays host to the NASCAR Sprint Cup Series night race at the Kansas Speedway, where Logano enters the race in the No. 4 spot in the Sprint Cup driver standings.

“As an American, I’m proud to support Folds of Honor and give back to the families of soldiers killed or wounded while serving our country to protect our freedoms,” Logano said. “It’s extremely humbling to hear the stories of the Folds of Honor families and I am honored to support such a patriotic cause.”

Gifts to the Folds of Honor, similar to that of the Joey Logano Foundation, support educational scholarships and financial needs of military families whose loved ones have been killed or disabled while in active duty. They help support private education tuition, tutoring and educational summer camps for children K-12 and higher education tuition assistance for spouses and children. 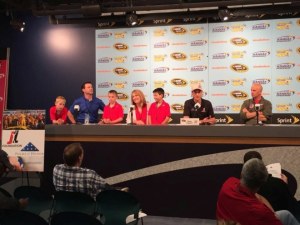 At the presentation ceremony, Logano and Major Rooney were joined by members of the Sweger family, Folds of Honor scholarship recipients. U.S. Army Sergeant Ronny Sweger served seven tours in Iraq and Afghanistan as a Special Forces engineer and suffered various physical wounds sustained during combat operations. Sgt. Sweger and his wife Claudia live in Salina, Okla., with their eight-year-old triplet sons, Briggs, Brett and Brooks, who are Folds of Honor Children’s Fund Scholarship recipients.

About Folds of Honor

Folds of Honor is a 501(C)(3) nonprofit organization that provides educational scholarships to families of military men and women who have fallen or been disabled in combat while serving in the United States armed forces. Our educational scholarships support private education tuition and tutoring for children in grades K-12, as well as higher education tuition assistance for spouses and dependents. Founded in 2007 by Major Dan Rooney, an F-16 fighter pilot in the Oklahoma Air National Guard who served three tours of duty in Iraq, Folds of Honor is proud to have awarded more than 7,500 scholarships in all 50 states, as well as Guam, Puerto Rico and the Virgin Islands, including more than 2,000 in 2014 alone. For more information or to donate in support of a Folds of Honor scholarship, visit www.foldsofhonor.org.

About The Joey Logano Foundation

The mission of the Joey Logano Foundation is to inspire and assemble the NASCAR community to assist those across the nation who are in need of a second chance due to natural or human disaster. The Joey Logano Foundation partners with other organizations to provide comfort and relief to those in need after such unforeseen circumstances. For more information visit www.joeyloganofoundation.com.