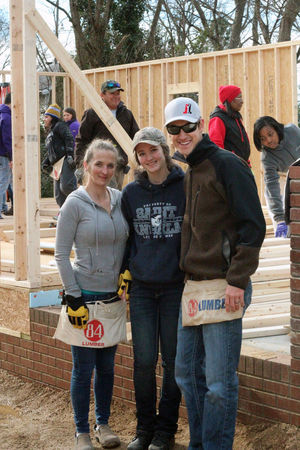 KANNAPOLIS — Connie Bennett would not consider herself a “big” NASCAR fan, but there is definitely one driver she’s going to start pulling for and that’s Joey Logano.

It might have something to do with the fact that the No. 22 Ford Fusion and Team Penske driver brought several of his teammates to help Bennett and her family with the construction of her new Habitat for Humanity Cabarrus Home.

“It’s good to prove that no matter how high somebody moves up in the world they still think about the little people that are trying to get somewhere,” Bennett said.

Bennett is a part of the Habitat for Humanity Cabarrus program, and Logano recently came out to help work on her home. Prior to his visit she had trouble rounding up volunteers on other weekends. Logano didn’t have that problem at all, bringing about 20 volunteers.

But Bennett’s home wasn’t Logano’s first time working with Habitat for Humanity. He’s actually worked on about five or six homes, he said. The first home he worked on a Habitat home was when he was driving for Home Depot and they set up a build after the tornado in Joplin, Missouri in 2011.

Logano’s work with Habitat for Humanity Cabarrus is just one of the many ways Logano tries to help out in the community. He is the founder of the Joey Logano Foundation, which formed in 2013, and since forming the foundation has given out close to $1 million, according to Shelly Biby, the executive director for the Joey Logano Foundation. Biby said they should hit the $1 million mark by May.

“One of our main focuses is that the organizations that we are giving to are high impact, very efficient organizations and we feel that Habitat is one of those, so really enjoy supporting them,” Biby said.

Logano’s roots in NASCAR and with Charlotte Motor Speedway being right here in Cabarrus County led to the Joey Logano Foundation working with Habitat for Humanity Cabarrus, Biby said.

“Part of our mission in a way is to make sure that when people donate money it’s going to the right causes, it’s going directly to help a family in need,” Logano said. “We go out and meet a lot of these families that we touch, whether it’s building a home like we are today, or helping the homeless. There are a lot of different things our foundation touches. It’s the most rewarding thing I get to do.”

Logano can also see the impact of his work, first hand. Bennett worked alongside Logano and his crew, looking forward to the day she could move into her home. She also knew she’d enjoy telling people the story of who helped build her home.

“I’m really excited about that because I can actually say that someone that is known by many was here,” Bennett said.

Bennett’s home is the latest and when it is complete it will give her and her family a new start in life. Bennett lived through a relationship clouded with domestic violence that led to a divorce that destroyed her credit history.

“It’s just really hard on a single mother with three children, two of them getting ready to go into college,” Bennett said. “I’ve still got one in 10th grade and I’ve struggled a lot, I’m divorced. It’s just hard to get out there in the workplace as a female and move up in the world.”
Bennett works at DNP Imagingcomm America Corporation, a full scale printing company in Concord, and lives on about $1,300 to $2,300 a month, depending on how much she works.

“It’s a struggle, you’ve got student loans now and car loans,” Bennett said. “Struggling with three kids I wanted them to have stability. I had a really, really rough marriage and it was really bad to my kids and I just want them to have that stability.”

It’s a stability that Habitat for Humanity Cabarrus can help provide, thanks to support from Logano and others.

“Obviously, racing is a lot of fun and winning is great, but when I look at being a champion, that doesn’t necessarily mean it’s in a race car a lot of times. You can be a champion in a sport, but that doesn’t mean you are a champion in life and things like this feel like it goes in that direction and you can go to sleep at night and feel good about yourself.”